Transforming the communities of Essex & East London through Christ’s presence

The Time is Now: ‘Watch this space in every community’ 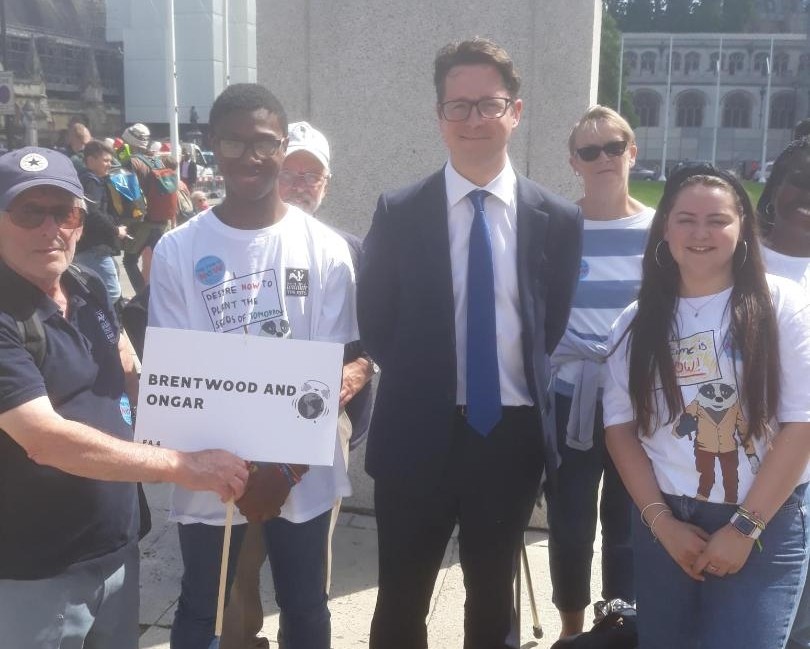 The lobby was calling on the government to act on Climate Change and to set a target of zero carbon emissions by 2045.

Dr Rowan Williams, who was there in his role as Christian Aid Chair, led people in a Walk of Witness from St Martin-in-the-Fields church in Trafalgar Square, past Downing Street to Parliament where they joined thousands of climate change campaigners.

He said: "Fewer and fewer people now doubt the urgency of our climate crisis, and a younger generation is showing us the way in resisting cynicism and passivity about this.

"It is imperative for people of faith to stand up and be counted – as witnesses to the sacredness of the world gifted to us by God, and as advocates in the cause of justice for all whose lives and livelihood will be most damaged by severe and unpredictable changes in climate."

A number of MPs came out of Parliament to talk to campaigners.

Revd Roger Gayler, a member of the Diocesan Environmental Group and Team Vicar within the Epping and Ongar deanery, attended the Time is Now lobby and writes the following account of the day:

“It certainly seemed that the time is now as we gathered at the Houses of Parliament alongside a knife crime protest a taxi driver blockade and the semi-permanent Brexit camps.

After a morning of worship, talks and walks we were there to lobby our MPs about the climate emergency.

Stretching on both sides of the Thames from Westminster to Lambeth Bridges 16,000 people were registered to meet their MPs. What a wonderful mix of banners, costumes and ages there were. Jesuit Mission school children mingled with Buddhists for change, The Women's Institute, Population Matters, The World Wild Life Fund, Christian Aid, Woodland Trust, Islamic Relief, CAFOD, Extinction Rebellion, Bishops and clergy, Wild Life Trusts, and Quakers.

In our group to meet the Brentwood and Ongar MP were someone from Oxfam in Brentwood, a Quaker, a Essex Wild Life Trust representative and three young people from the Diocese of Brentwood working out of the Brentwood Retreat House. We finally met Alex Burghart, our MP at the foot of Churchill's statue. Whether it will be our finest hour remains to be seen. Our MP was clear about the need for long term planning and the need to give in this generation so that future generations will benefit - "Planting trees that others may sit under". How the short term action comes out of that was not clear.

As a group we asked that climate change should be the first item on every cabinet and committee agenda and no policy should contradict that.  Food, factory, industry, trade, and commerce should all be recognised as interlinked. We urged the global nature of the crisis and government aid should reflect that. We urged the need to engage the public so that all levels of the country could feel involved, young and old.

Other constituencies in the Diocese were there although some did not get to meet their MP. Sad for the lady from Braintree who had brought a bag of rubbish from Braintree that had found its way into a Malaysian tip.

What was clear was the commitment of a whole range of individuals and groups that we can and will work together to meet the crisis. Watch this space in every community.”

Climate cahnge campaingers met with Alex Burghart, MP for Brentwood and Ongar at the Time is Now event in Parliament Square.